I finally had time to get home, unpack, and reflect on this past weeks trip to the 2016 USA Volleyball Adult Open Nationals. I decided I would go with the “Good, Bad, and the Ugly” theme for this post.

Well, there you have it. My quick recap of the 2016 USAV Adult Open Nationals. I want to thank Jay Hosack, Pete Madia, and Shawn Ganter for letting me share this crazy PVL ride with them this year. I want to thank the KRVA board for funding the team. Thanks to Katie Holloway for asking me to be on the NorCal Sitting team. Thanks to everyone on NorCal for accepting me in and helping me figure out the sitting game. Thanks to the Florida region for being awesome hosts. Thanks to Orlando for being a great host city. Thanks to all the VCT’ers that came and said hi. I do love networking, even if I am socially awkward. Most of all…Thank you to my wife and kids who have be keeping things going at home while I have been traveling. I am glad I get a few weeks break!!!! 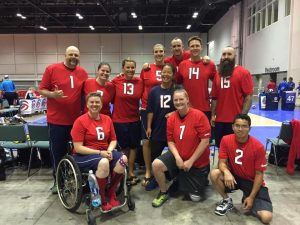 ← The Case for Cam
Captain, My Captain. →