A recent post by a person I admire a lot (Tim Toy) in the Volleyball Coaches and Trainers group on Facebook really hit home for me. His post was about the use of the word “cancer”. He has given me permission to post the screen shot here: 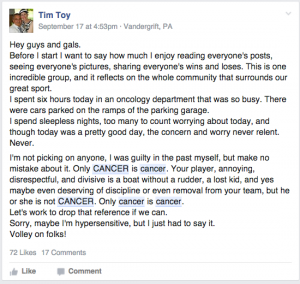 Just a little background on me. I am the son of cancer survivors (Mom and Dad, and both in remission). I also have lost from good friends to cancer, and have good friends who have beaten their challenge with the disease. That all being said, this is not a “holier than thou” post. It is more about how I have grown as a coach, and I guess as a man.

I fully admit that I have called a player a cancer in the past. You know, the one player who no matter what, brings your team down and pulls them apart. the drill killer, the team splitter, the lost soul. It just always seemed to be a good term, “cancer”, to use. I know there has been a movement in recent years (and rightfully so) to remove the word “retarded” from the descriptive language, but I just never thought about using the word “cancer” in the same light.

Tim has be a very vocal support of his wife’s (and fellow volleyball coach) battle with the disease. You can read more about it here at: http://www.jamthegym.com/ . Once he made the post above, it really got me thinking. Not about how it may be non-PC to say, or why it is wrong to say. I started to think about “why would I use it”. I know this will sounds simple, but… Cancer is bad. I get that it is easy to use it for a kid who is “bad” for your program, but that is where the similariteis stop. This is where I had my moment of shame.

Calling a player a “cancer” was not a reflection of how bad the player was at the sport or for the program. It was a reflection of how bad of a coach I am. Cancer is something you want gone. Removed. Excised. Is that what you really want for the player? Was I really saying “I am not good enough as a coach to make this player better for the team or the sport?” Me calling that player a cancer was really me waiving my white flag and saying this kids bad habits (skills, team, social, etc) are far greater than my ability to coach him. I was conceeding that I was not a good enough coach to at least improve this players life in some manner. I was saying this player has beaten me, and now I just want them removed. It is easier to remove them from the situation, than to try and make it work. The sad part is, I failed to realize (and there were multiple times) that this was a chance for me to grow as a coach and get better. I wanted the easy way out.

In a nutshell, I was saying that my inablility to coach this player was one of the worst things I could think of: a deadly, usually fatal disease. I get the fact that not every player will be the best to work with. There will be challenges (a lot of them). But isn’t it our job as coaches…Change that…As mentors to our players to try and help them in some way? Even if that means sitting them down and telling them “hey look, you just do not fit our program and what we are trying to do.” I have seen what cancer does to a person, their family, and the people around them. Looking back at all the troubled kids I have coached in the past, I can’t ever recall looking at one (in retrospect) and seeing that type of pain, sorrow, and hurt from them.

So thank you Tim for brining this up. It really was something that made me reflect.