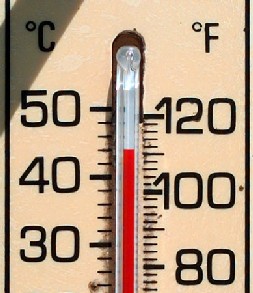 I heard an interesting “phrase” today while I was out and about.  A person was helping a friend through some unknown situation.  The person said, “You have to be a thermostat and not a thermometer”.  I never thought of things that way, but while I was meditating I put that in the front of my mind.   It became very clear what they meant.  A thermometer just responds to the data it is given.  A thermostat actual control the data.

A lot of times we coach teams to deal with certain situations.  The problem is that most coaches spend too much time on this concept.  This is what makes a team a ‘thermometer’.  A team needs to be the ‘thermostat’ and control the match/game.  A coach needs to teach his team how to put the opponents in to situations.  Let them be the thermometer and give them the ability to only react.  This sounds like a basic concept, but how much time do you spend actually working on getting teams to fall in to your game plan?

This is where practice design comes in to play.  How many coaches out there do drill after drill?  That is teaching your team to be a thermometer.  Even if the drill is designed to put teams “out of a system”, you are still putting confines on their actions.  We have to teach our players to do it in real time.  My suggestion would be to modify game play to award being a thermostat.  For example:  Do a hitting vs. defense scenario (it can also be a scrimmage).  The goal is to get the hitters to hit at your defender in the 5 spot.  That means your block and other defenders have to change their actions to funnel the action to 5.  Award a big point if the 5 spot digs the play up.  The key difference in this drill is that the defense is not sitting back waiting to get the ball up.  You are actively trying to force the other team where you want them.  This is a pretty simple concept that gets lost a lot in the normal course of a season.  A team gets beat up pretty bad by an opponent and the first thing a coach will do is adjust players that were out of position or making the errors.  The truth is, the coach needs to look and see if they were being active (thermostat) or passive (thermometer) in their play.

Think about your “speech” difference between you calling a timeout and the opponent calling the time out.  Usually, if you are the one that calls the time out, you speak more passively.  You talk about what the other team is doing to you and how you should react to it.  When your opponent is the one calling the timeout, you are usually talking about what you need to do to secure the win.  There is little talk about reactionary play.

In closing, when you are in practice or a game, just take the time to think about where you stand.  Are you going to be the thermostat or the thermometer?